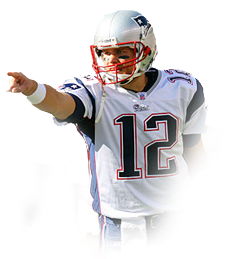 When asked by the Daily News if he's ever seen Brady pointing after the Patriots score, Cromartie responded saying, "We see that a lot. He does it a lot. That's the kind of guy he is."
If only Brady were more like the kind of guy Antonio Cromartie is. The kind of guy that has fathered nine kids over eight states with six women. The kind of guy that was only able to refer to eight of his nine children here. The kind of guy who has "a...my daughter (who's name also seems to escape me, even though her birthday was the day before this interview) that just turned three yesterday."
"Once you leave and get home you gotta be that father figure." For whichever kid happens to be in the area on the Jets road trip I guess.
When asked what kind of guy Tom Brady is, Cromartie said, "An ass----. F--- him."
Spoken like a true upstanding gentleman. 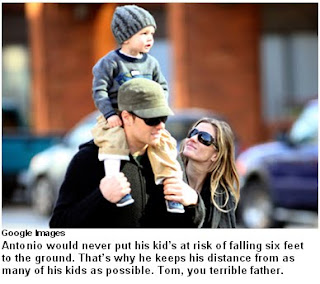 Tom Brady is an ass---- for pointing.
If only he were more like Braylon Edwards. Guy's kind enough to teach corners how to "Dougie" in their face after TDs (even after he's arrested for driving intoxicated (.16 BAC) earlier in the week).
Or Santonio Holmes. Yeah, he's a great guy. Makes everyone feel like they're playing in the Super Bowl when he treats every first down like a spectacle, signaling first down more than the refs, after some spastic dance.
Or talking smack down 21 after a six yard gain.
If it weren't for NFL copyright laws, we could pay tribute to LT too, celebrating what must have been the greatest first down of his career against the Patriots - an 11 yard run before the Patriots narrowly defeated them, 45-3.
These are the kind of guys the Jets are. Shame on Tom Brady for pointing at the team that tries to break him down with insults and backhanded comments every week (even when the Jets aren't even playing the Pats). It's absolutely insulting that Tom has the nerve, THE NERVE!, to point at the Jets sideline. The J. E. T. S. Jets! Jets! Jets! carry themselves with class each and every week. They garner more respect as model citizens than any team in the league. DUIs, guys with nine kids, YouTube creepy foot-fetish videos and a coach and his wife's internet group sex application? Yep the Jets exemplify class.
And Tom Brady is such an ass----. F--king pointing at us and s#!+. How dare he victimize the Jets? Un-f'n-believable.
Posted by Wingman at 11:01 AM

Im glad someone wrote a fair blog about this! Bachtalk seems to agree that tom brady is an A--H---

I never said the Jets weren't assholes too, A-Rod. And now that I think about A-Rod's an asshole too.

Id have to agree with you, A-Rod is a douche..he cheated on his wife with whores...

A-Rod's wife was an asshole. She wore shirts that said "Fuck you" to Yankee games. There were kids around.