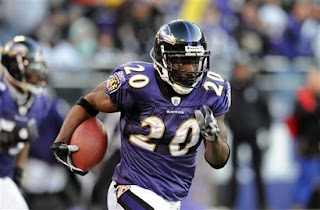 With the NFL's divisional playoff weekend right around the corner, it's time to make some picks. For the eight remaining teams, there's no turning back. There will be no second chances this season. A win and you move on, a loss and you go home. This is the time of year when every play matters. One mistake could make or break a season. It's also the time of year for a fresh start. Records don't matter anymore. Once you're in the playoffs, you control your own destiny. The Chargers are no longer 8-8. They're tied for first at 1-0; a top 8 team in the NFL. The Titans' NFL best 13-3 record means nothing as well. It can just as easily be erased and forgotten with a loss to the Ravens on Saturday. Then there's the Eagles. Just a few weeks ago, Andy Reid benched veteran quarterback Donovan McNabb and Philadelphia was in turmoil. It seemed the Reid/McNabb era was coming to a close. However, the Eagles rallied and snuck in the playoffs at 9-6-1. Quarterback and coaching controversy of the past aside, the Eagles are just three wins away from being Super Bowl champions, and are confident they can win it all. That's the beauty of the playoffs; it's anyone's game for the taking. How else can you explain the Giants remarkable Super Bowl run last year? You just can't. Even so, here's my attempt to explain what's going to happen this week. Sport betting odds aside, here are some games I'd be willing to do some online sport betting on.

Baltimore 20 - Tennessee 16
Tennessee's got experience at quarterback, a stellar tandem in the backfield, and a fierce defense. Not to mention, they've got an electric home crowd on their side. So who am I taking? Baltimore. The Ravens fear no one. Their defense settles for nothing less than excellence on every play, and usually gets it. Combine that with an offense that does just enough, and the Ravens are a serious threat to make some noise in the playoffs. Lewis, Suggs, and the rest of the Raven defense, will likely put out bounties for Lendale White and Chris Johnson. The defense is just that intimidating. And with Ed Reed lurking around in the secondary, expect Kerry Collins to struggle offensively. In a defensive battle, the Ravens avenge their 13-10 loss in Week 5 to the Titans.

Arizona 24 - Carolina 31
As much as I really want to call this my upset special and take the Cardinals, I just....can't. Well? No, I can't. Carolina is 12-4. They're 8-0 at home. And Jake Delhomme is 5-2 as a starter in the playoffs. The records don't lie. But like I said before, records mean nothing come playoff time. Either way, Carolina still takes this one. DeAngelo Williams simply cannot be stopped. Combine that with the speed of Steve Smith, described by Kenny Mayne as, "incendiary", and it's easy to see why Panthers have the edge in a shootout. With Anquan Boldin's health remaining in question, I cannot see the Cardinals upstaging the Panthers on their home turf. Carolina takes this one by a touchdown.

Philadelphia 17 - Giants 23
In a scary matchup for Giant fans, I think the home-team prevails. Both division rivals came away with a victory on the other's home turf, but that won't be the case this Sunday. The playoff atmosphere is so much different than any regular season game. The home crowd should be raucous for the defending Super Bowl champs. But where the game really matters is down on the field. I think this game is won in the trenches, which gives New York the edge. Temperatures will be around 30 degrees for the game, and although Philadelphia isn't bothered by the cold weather, they will be bothered by one thing: attempting to tackle Giants RB Brandon Jacobs in the frigid cold. I expect New York's backfield to wear down Philadelphia's defense early on, giving the Giants the edge they need to come away with a victory in the end. The cold weather won't help the ailing Brian Westbrook, so it'll be up to Donovan McNabb to beat the Giants through the air. With these tough conditions, I think the Giants running game outperforms the Eagles passing game, in a close one.

San Diego 13 - Pittsburgh 15
In Week 11, the Steelers barely edged out the Chargers in the NFL's first 11-10 game. I say the two teams start a trend and the Steelers win in odd fashion, 15-13. The Chargers are hotter than any team right now, but I do believe the Steelers are the favorite to win the Super Bowl. Their defense is the best in the NFL. Ben Roethlisberger is a proven, big-game quarterback. And Heinz Field is just impossible to play on. Have you seen that thing? It's like a mix between quicksand and ice. But to Pittsburgh, it's their home field. They count on it to produce odd-/low-scoring games in which they usually win. I think the field stays true to form for them. My star watch: a healthy "Fast" Willie Parker.

Happy Divisional Playoffs everyone. May the best teams survive. And may the sport betting odds be in your favor.

too bad you didn't go with your gut and make the Cardinals your upset special.