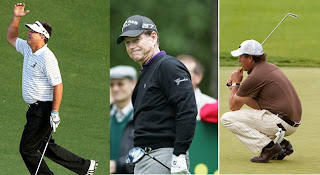 The PGA Championship doesn't start for another two weeks. But last Saturday, three buddies of mine and I, played a little tour championship of our own.

The stakes? A round of beers. Hardly the multi-million dollar purse the pros will be playing for in two weeks. But there was pride on the line as well. And the underlying theme of the match? Well, it was eerily similar to the three Majors we've seen thus far in 2009.

Gervino is the only player with true golf experience. In fact, three years ago, he was a handicap of just over 1. Since losing touch with the game at college, he's fallen back a step, but he was easily the best player of our group, and worthy of a 5-stroke penalty.

For Gervino, Tiger Woods seems the most fitting. But he's a lefty, so we'll go with Phil Mickelson.

Pascarelli is the John Daly of the foursome. The man can power the ball down the fairway and throw a few beers back in the process.

Peo addresses the ball like Tony Batista at home plate, knowing full well his shot will fade 60 yards to the right on his drives. He's the Jasper Parnevick of the group, although the rest of the guys will tell you the shorter distance the slice gives his drive makes him look more like Annika Sorenstam.

Myself? Well, I'm the Sergio Garcia of the group. I take too many practice swings, think too long about my shots, and shoot too many shots over par.

Here are the highlights:

1st Hole
My whole life I've been fighting a psychological battle with the opening tee shot. And much like the Yankees versus the Red Sox this season, I've lost every time. But even with that fact looming and all the pressure of the match hanging over my head, I still felt confident I was going to blast my first shot.

And I actually did. I crushed the ball with a nice draw towards the center of the downhill fairway on the short Par 4. I was thinking birdie. Until I realized I should be thinking bird's nest. This stupid tree on the right side had the longest branches looming over the right edge of the fairway. My ball didn't draw fast enough, and my 250 yard drive looked to be doomed, catching the last edge of the branches and leaves. But you figure a smash like that would still go another 60 yards, right? Nope. Those must have been some thick leaves, cause my ball went straight down into the wood chips. 250 yards to 80 in a moment. This is my golf game.

2nd Hole
After taking an early one stroke lead on the first, Tiger and I had a great opportunity to capitalize even more on the second. Tiger was on the green in one on the short par 3. I was in a small bunker to the right of the green. Parnevick duffed his drive. And Daly was hiking in the woods. Now I'm all for taking lessons from superior players. It's great for your game. But never take lessons in the middle of a round. Doing something right on your first try rarely happens on the golf course. Gervino explained to me that I should aim an inch behind the ball, and swing through the sand as hard as I could. I swung as hard as I could alright. But I came through the ball cleanly, and hit it 70 yards over the green into the woods. Right over Pascerelli actually.

I never recovered. Gervino and I found ourselves in the water on the next hole, and would spend the next 10 holes convincing ourselves that the next one would start our heroic comeback.

14th Hole
With only five holes remaining, Gervino and I had dug ourselves into a 12-stroke deficit. At this point, I was mentally "shook", convinced there was no way I would ever hit a good shot the rest of the way.

But Peo found his ball at the edge of a pond, somehow floating on the water (there had to be mud and muck under it). So we convinced him to hit the ball out of the water - a free stroke of course. The ball went four feet into the pond, Peo almost went with it, and came up with nothing but a face full of mud. Mud he wasn't aware was on his face. Mud we weren't about to tell him was there.

He then proceeded to reach his hand into the murky water and pulled out nine golf balls. I kid you not. Nine golf balls. From less than a square foot of the pond. There must have been thousands in there. He was never able to recover from the fiasco down by the water's edge. After his free drop, he hit the ball straight into the same pond. Joe and I took two strokes on the hole, now down 10 with four to play.

15th Hole
Peo continued to fall apart, and Gervino and I jumped all over the opportunity to mount a comeback. Pascarelli and Peo began arguing. Meanwhile, Gervino and I put together a nice string of shots, taking back seven strokes from the deficit. Three down, three to go.

17th Hole
After cutting their lead down to just one, we came to the par 3 17th. Peo struggled, Pascarelli overdrove the green, Gervino put one on the fringe, and I landed mine on the green. A few putts later, and Gervino and I had completed the greatest comeback in golf history! We haven't confirmed that with any golf historians yet, but I'm 85% confident it was. Overcoming a 12-stroke deficit in four holes? Unheard of.

What a story this was.

We were now on par with Kenny Perry winning the Master's at 46, Phil Mickelson winning the U.S. Open against all adversity for his wife, and Tom Watson winning the British Open at 59. If only any of these stories had actually come to fruition on the 18th hole.

18th Hole
You really have to see this hole to understand it, but I'll do my best to explain it. The hole's roughly 360 yards. The fairway extends 150 yards dead straight, before the last 210 yards dogleg to the left. There's a way to cut the fairway, putting you within 100 yards of the flagstick, but there's one problem. There's a huge tree right where the fairway doglegs left. There's a gap to the left of the tree, maybe 40 yards long. But if you miss left, you're in the heavy woods.

Since Gervino and I were in the lead, we decided to play conservative. After all, all we needed to do was match Pascarelli and Peo shot for shot. And that didn't seem like a difficult task at the time. Gervino took the safe route, but crushed his iron past the fairway and into the woods. Peo aimed for the difficult route, but naturally sliced his ball into the woods past the fairway, 40 yards behind Gervino. Pascarelli took a chance on the woods and hit the shot of his life - a 250+ yard smash between the giant tree and the woods, leaving him about 100 yards from the pin. Then I stepped up with a 4-iron (perhaps too lengthy, but the only club I trusted), and drilled the ball down the center of the conservative route. The club was too lengthy, indeed. I hit it over the fairway, into the deep woods.

Gervino punched out, Peo punched out, Pascarelli waited, and I prepared my shot. My ball was resting on dirt so hard I was practically hitting off a countertop. I had a clear opening to the hole though. Here goes nothing. For all the marbles, or free rounds of beer and pride I guess. I hit the ball hard enough, but not straight enough. The ball went flying right into a tree, that propelled it off another tree, and another tree, until it landed ten feet behind me, deeper in the woods.

I then gained my composure, convincing myself that Peo was playing so bad right now I could still beat him. Took a nine iron (smart golfers would know otherwise). Took another hack at the ball. And watched as my ball sailed straight up into the tree 20 feet in front of me. I heard it hit bark six times. It must have been going back and forth between trees. It finally came down, hitting the tree 20 feet in front of me, only to bounce back into the woods ahead of me.

That my friends, is collapsing under pressure. Gervino and I lost three strokes on the hole, losing our bet by two overall.

I felt like Kenny Perry, Phil Mickelson and Tom Watson all at once. To do the improbable, and feel like you've already won, only to lose it all on the last hole.

To quote Tom Watson:
"It would have been a hell of a story."