No one has any idea what's going on in the NFL right now. Power rankings are changing every week. Analysts think they know who the best teams are. But they don't. How am I supposed to make picks when nothing that happens each week makes sense? Look at this chart: 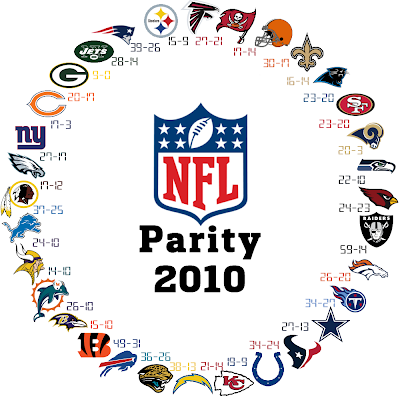 I rest my case.
BUT....
I ran some tests and came up with a few complex algorithms, and I think I've cracked the code for this parity chart. Anything less than 16-0 this week will be a disappointment.
Houston at Philadelphia (Thursday Night Football)
Before I start. Is anyone actually going to watch this game? Lebron James is going to motha f****n' Cleveland that night. I repeat. Lebron James is returning to Cleveland. This should be on Pay Per View. I heard the first 10,000 fans get fake daggers to stab in their back. And guess what? It's burn your Lebron jersey night! At halftime, fans will pay tribute to the "King" with a bonfire at center court, giving each fan a chance to toss their old jersey into the blaze. These are just ideas coming to me right now and I'm not even a Cleveland fan. Imagine what they have in mind? Especially this guy:
By the way, is there any way Cleveland isn't winning this game? This may be my mortal lock of the millennium (not to be confused with Will Smith's hit CD, Willennium (Yes, that's a link to buy Willennium. Who wouldn't want that?)).
So there's also that football game on NFL network. About that. They say in competition it's "not about the size of the dog in the fight, it's about the size of the fight in the dog." Tell that to Cortland Finnegan. He got rocked by the bigger dog.
Oh s***, this is the Eagles game, now's not the time to be referencing "fighting" and "dogs". I'm sorry Mike. I like what you're doing with your second chance though.
Cut to Tony Dungy, shaking his head disapprovingly at me...
Moving on...
Washington at NY Giants
I owe an apology to the Giants for last week. I doubted them, and they proved me wrong. Which prompted this text from my friend, Rone:
"I saw you had a pretty good week with your picks...if only you didn't doubt your G-men it would have been a fantastic week haha."
As if it didn't hurt enough already. I'm a believer this week.
Denver at Kansas City
Head coach Josh McDaniels is cheating and Denver still can't win. How bad is this team? I'm taking the team that's playing Denver.
Jacksonville at Tennessee *Gus Johnson alert
Need I remind you what happened the last time Gus Johnson called a Jaguars game?
Gus nearly jizzed his pants. Gus' presence alone could turn Rusty Smith into a Pro-Bowl quarterback on Sunday. This was no question a Jaguars victory until Gus Johnson came into the mix.
I guess I'm gonnnnnnnnnaa goooooooo withhhhhhh theeeeeeee JJJJJJJAAAAAGUUUUUUUAAAAAAAARRRRRRSSSSSSSSSSSSS!!!!!!!!!!!!!!!!!!!!! AHHHHHHHH!!!!!!!!!!!!!
San Francisco at Green Bay
This is me when I found out Frank Gore was out for the season:
He's on my fantasy team. There goes $20. I don't know if San Francisco is capable of getting to the 6-10 record they need, to win the NFC West without Gore.
Cleveland at Miami
I didn't have any "divine moments" this week that would encourage me to pick the Dolphins. But, they've kind of been one of my go-to picks all along this year. And I'm not gonna change that this week. They're only losses came to the Pats, Jets, Ravens, Steelers and Bears. I'm pretty sure this team is really good.
Buffalo at Minnesota *Upset Special
I could say a lot of things about Stevie Johnson and his message on Twitter the other day, but I'll let Bach Talk do it for you. My advice to him, in one sentence: Bills fans will "forget this," you should too.
On Minnesota's end. Interim coach Leslie Frazier helped Jenn Sterger's case this week:
Oh we believe it Leslie. We believe it all too well. It's no secret, Brett is comfortable being naked. I know that. You know that. Jenn Sterger especially knows that. It's a fact. He's also comfortable in his Wrangler jeans. After all, they're: "Real. Comfortable. Jeans." And I'm comfortable taking the Bills in this one. If Johnson doesn't drop that catch they're still the hottest team in the NFL right now.
Chicago at Detroit
Since Detroit already won this match-up in Week 1...
...as evidenced here:
I can't expect another upset victory for the Lions. I took the Bears as the underdog last week. I'll take them as the favorite this week.
New Orleans at Cincinnati
Drew Brees was named Sports Illustrated's "Sportsman of the Year" the other day. I guess that means no athlete did anything impressive since February. Let's look at our usual candidates for this honor:
Derek Jeter - had a career-worst year and can't even get a contract extension from a team he brought four titles to.
Tiger Woods - spent the early part of the year in "sex addiction rehab," and won no tour events for the first time in his career.
Brett Favre - threw a trip to the Super Bowl across his body and away (literally), retired (again), came back, led the Vikings to a 3-7 start, and allegedly sent pictures of his junk to former Jets employee Jenn Sterger.
Lebron James - gave up on his team in the playoffs, made a spectacle out of his free agency, conducted a prime time event titled, "The Decision," so he could back-stab a city that stayed behind him his whole life on national television, while at the same time destroying the city's economy.
Huh. I guess it was kind of a down year for the usual candidates. Who knew this award would be decided in the first month of 2010?
Anyways, back to the game. Chad Ochocinco had this to say on Twitter this week:

It's bad when it's Week 12 and you just start to realize you need to straighten out your priorities. The Bengals of "Hard Knocks" have come and gone.
Oakland at San Diego
Your classic "trap" game. San Diego is coming off a 22-point slashing of the Colts on Sunday night. Analysts alike are already crowning them the "cream of the crop" in the AFC. This game has every ingredient for a San Diego let down. But if there's one thing I've learned over the past 3-4 years, it's that San Diego has no let downs during their end-of-the-season-perfect-streak runs. The first half of the season and the playoffs? That's another story. But "let-down" isn't in San Diego's vocabulary come November or December.
Carolina at Seattle
Every person still alive in their survivor league was probably down on their knees praying John Kasay would miss that game-winning field goal at the end of regulation on Sunday. Hey! Maybe that's why Stevie Johnson dropped the ball. God was so overwhelmed with all the prayers begging him to let John Kasay miss that field goal, he didn't get a chance to help Stevie out. Suddenly it all makes sense. You don't see John Kasay questioning God now, do ya Stevie?
Expect another disappointing ending for Carolina in Seattle.
Atlanta at Tampa Bay
All year I have refused to really give credit to either of these teams. And my picks are suffering because of it. Tampa Bay gave Atlanta a run for their money last time, but Atlanta is riding a streak of confidence right now. I'll take the better team on the road in this one.
St. Louis at Arizona
Boy was that one of the worst games of Monday Night Football I've ever seen. The Cardinals might be the worst team in the league. I will give them credit for one thing though. Damnit, their quarterback puts his heart and soul into each and every week. And it's no laughing matter.
Dallas at Indianapolis
What happened to the Colts? Yeah, they're decimated with injuries, but when did that ever matter? Since when is Reggie Wayne unreliable? He's dropping catches most anyone - with the possible exception of Stevie Johnson - in the league could catch. He's supposed to be Mr. Consistent. Something about the whole team and their demeanor is off. Start playing like Super Bowl contenders! I picked you pre-season to win it all. This is starting to get embarrassing.
These next two games mean something. I mean they're pretty much the most important game of the year for these four squads. The winners likely win their division and the losers are likely a Wild Card team. Which means, the winners would get a bye and the losers would likely play a healthy Colts or Chargers team on the road. Not exactly a spot I'd want my team in. I don't have to worry about it, but the Giants will find a way to torment me in another way.
Pittsburgh at Baltimore
I still think Pittsburgh is the better team. But, there's talk of Big Ben being injured this week, Baltimore is a great team at home, and James Harrison should pick up just enough personal fouls to put Baltimore in a position to win, and get him fined another $25,000 when it's all said and done.
NY Jets at New England
The Game of the Week. You know it'll be a close game. It always is in these divisional, arch-rival match-ups. So let's break everything down. I'll include stuff that you'll think probably doesn't matter, but trust me, it does. 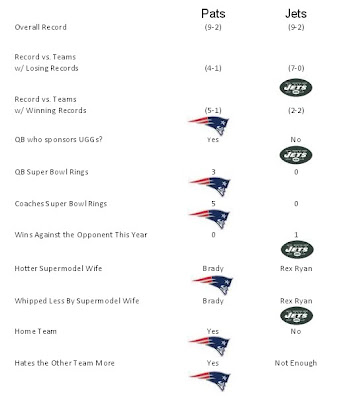 I know Jets fans are going to say I never gave them a chance. But the truth is, you have to look at the facts. The Patriots constantly come through in big games. Their two random games this year were against the Colts and the Chargers. Those same games for the Jets were against the Broncos and the Texans. They're not battle-tested like the Pats are. And the Pats won all of those battles. They're a new team without Randy Moss. They're playing at home. And I think they want this one just a little more than the Jets. They don't take embarrassment very well. The Jets embarrassed them earlier this year. You think Tom Brady hasn't had this game circled on his calendar since 4:00pm that day? Sure it's next to UGG ad photo-shoots and hair plug treatments, but when he's on the field and away from Gisele, he comes to play. Yes Sanchez has been clutch, but I think this is a whole new level for him. The offense goes through him now, not the run game. Is he going to be able to make the big throws in a game of this magnitude when it matters? I'm not so sure. I know Tom will. But I don't know about Mark. The cocky and care free approach is all in good fun and it works against the lesser opponents. But it won't work against the Pats. They got practice off on Wednesday because they've been so focused all week. Bellichick never does that. The Patriots want this one more.
Last Week: 14-2 (season best)
Season: 104-72
Posted by Wingman at 8:48 PM