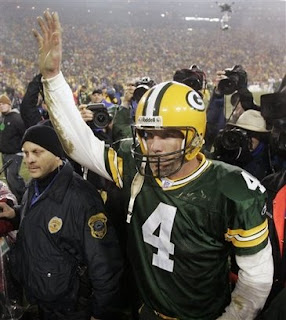 After 17 illustrious years, Brett Favre has finally decided to "call it a quits". Favre is, without a doubt, one of the greatest quarterbacks to have ever played the game of football. Not only was he known for his talents, but he was also known for the way he handled himself on the field. Favre had a love for the game as great as any other. He knew how to look past all of the troublesome parts of the game, and just have fun. He played the game like a kid, and played it well. For him, it was not about the records, it was about playing the game he loved and enjoying his success along the road.

As for the records that came along the way though; there were sure a lot. Favre is the only 3-time MVP in NFL History, holds the NFL record in TD passes (422), passing yards (61,655), and career victories (160). He started a record 253 consecutive games at quarterback (275 including the playoffs), and will always be remembered as one of the toughest players to ever set foot on the field. It's amazing how such a kid at heart could be so tough at the same time. Favre's greatest football accomplishment was his victory in Super Bowl XXXI. He became what every professional athlete aspires to be...a champion.

No one is more devastated about the loss of Favre than Packer fans. He has been the face of Green Bay for the last 16 years. Every Sunday from September to January the streets of Green Bay are desolate. Packer fans are either glued to their television sets or sitting on the frozen bleacher seats at Lambeau Field. Favre won over their hearts from the start and he never let them down. He turned their organization around 16 years ago, and Packer fans will always be grateful for what he did for them and their team. It will be hard for them to let him go, but they can never be mad at Brett, for he gave them so much.

Favre is respected by all that watch and all that play the game. He is the admiration of all his fans and peers. Everyone should play the game the way he did. Both as a professional and as a kid.

My fondest memory of Brett Favre is his spectacular performance on Monday Night Football, December 22, 2003. The very next day after his father had passed away, Favre refused to leave his football team in his darkest hour. Instead, Brett did something that undoubtedly left his father looking down on him with a smile. He passed for 399 yards and 4 TDs in a 41-7 route over the Oakland Raiders. It was one of the most inspirational games I have ever seen. I remember the announcers, John Madden and Al Michaels, were blown away by his performance. As was everyone else who had witnessed it. Favre said after the game, "I knew that my dad would have wanted me to play. I love him so much, and I love this game. It's meant a great deal to me, to my dad, to my family, and I didn't expect this kind of performance. But I know he was watching tonight." No other statement could clearly define how much the game of football meant to Brett. A game he made look so easy. A game he made look like so much fun.

Image taken from Yahoo! Sports
Posted by Wingman at 8:48 PM No comments:

Short-Lived at the Top... 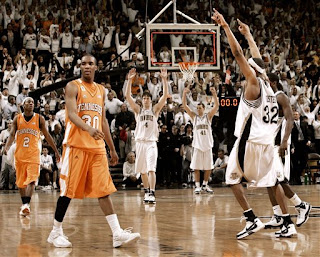 For the first time in school history, the Tennesee Volunteers found themselves at the top of the AP Poll in college basketball on Monday. Fresh off their well-earned 66-62 victory over #1 Memphis, Tennessee was riding high. This proved to be short-lived. How short-lived? Well, 24 hours. The poll won't be change until this upcoming Monday, but Tennessee knew immediately after its 72-69 loss to #18 Vanderbilt on Tuesday that its time at the top had come to an end as quickly as it had started.

It certainly seems Vanderbilt has mastered knocking off #1 teams on its home court. The victory Tuesday over Tennessee was the 6th time in the last nine attempts that Vanderbilt has successfully dethroned a #1 on their court. Last season, Vanderbilt took down #1 & eventual National Champions, Florida, at Memorial Gym.

The key to Vandy's win was the exceptional play of Shan Foster. Foster dropped 32 points and added 5 boards, leading the Commodores to victory. Tennessee's guard, Chris Lofton, had 25 points and the star forward in Tennessee's win over Memphis, Tyler Smith, added 11 points and 17 rebounds of his own, but it wasn't enough. The Vols were simply out-played.

Others might suggest the key factor in Vandy's upset was the court. Unlike every other court in Division I, Memorial Gym is elevated. Because of this, both benches are located on the endlines rather than the sidelines. Some suggested that because Tennessee's coach, Bruce Pearl, was so far away from the action, it could have affected his ability to coach his team over the noise of the raucous crowd. Although it is not worth making excuses, Vanderbilt's 6-3 record versus #1 teams at home suggests there may be some truth in this assumption. Regardless, Vanderbilt's victory was very impressive and no one should take anything away from their performance.

So who is #1 now? The hot play of Texas, riding an 8 game win-streak (4 of which were vs. top 25 opponents), made it seem as if they were deserving of this honor. However, an 83-80 loss to Texas Tech today has nullified their chances. That leads me to believe that North Carolina will make the jump back to #1 with their come from behind 90-80 win over BC. Memphis should fall closely behind at #2.

Image taken from Yahoo! Sports
Posted by Wingman at 3:37 PM No comments: