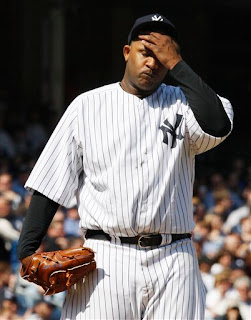 In front of a crowd of 48,271, on a beautiful day in New York, the Yankees gave their fans exactly what they DIDN'T want. Was it one to remember? Maybe, but in a good way? No chance. After a solid performance from their $161 million investment, the Yankees turned the ball over to their bullpen. At the time, the score was 1-1. It wouldn't be long before that changed though.

As the wall door in left-center field opened, a man in pinstripes emerged. That man, was not Joba Chamberlain. Should it have been? Should our government do something about this economy? Of course. But Hal Steinbrenner thinks Chamberlain should be a starter. He also doesn't seem to think much of the economy either. See $423 billion in the dictionary.

After Phil Coke worked the Yankees out of the sixth inning, Jose Veras came in to start the seventh. He walked the lead-off batter (one of the worst things a pitcher can do), then gave up back-to-back doubles, allowing two runs. Demaso Marte came in to save the day -- for Cleveland. In case they had any doubts about the outcome of the game, Marte surrendered seven runs in a matter of minutes to Cleveland (single, walk, grand slam, home run) . Talk about a buzz kill. If there's ever a way a team wants to open their new stadium, this wasn't it.

As I recall, the Yankees were a playoff team with Chamberlain in the bullpen. Since Steinbrenner forced his move to the starting rotation, the Yankees failed to make the playoffs and have bounced back to a 5-5 record this year. Not the results you want to see as a fan. Chamberlain is 4-3 as a starter in 13 games. As a setup man two years ago, he was 2-0 in 24 innings pitched, with 34 strikeouts and an ERA of 0.38. The man gave up 1 earned run! He was a force to be reckoned with. The Yankees probably won 17 of those 19 games he pitched, I would imagine. Maybe more. When the game got to the 7th or 8th inning, it was over. Fans had peace of mind and could relax and enjoy the end of the game, anticipating a Yankee victory.

With the offseason acquisitions of Burnett and Sabathia, and with Chamberlain starting now, fans are relaxed for the first 6 to 7 innings, and hit panic mode in the last 2 or 3. The Yankees lost one series, thanks to the "attack of the mosquitos" in Cleveland, and Steinbrenner immediately yanked Chamberlain out of the bullpen. They had the winning formula, and Steinbrenner's impatience put it to waste. Remember Rivera and Wetteland? Here's a little reminder from Joe Torre's book:

70-3 when they led after six innings! No wonder they won the World Series. They got to play offense for nine innings, while the other team played offense by little league rules (six). The Yankees of two years ago, and even part of last year, had that winning combination. What are the odds another Rivera comes along? Next to nothing! And the Yankees found him. It was Rivera and Wetteland all over again. Chamberlain was the perfect heir to the thrown. Marte and company, are not.

70-3 when leading after the sixth wins champions. The Yankees could have five hall-of-famers in their starting rotation (they might actually), but it's not about how you start, it's about how you finish. I'd take a decent fifth starter if it means that Chamberlain is there to close the door with Rivera.

If Steinbrenner doesn't soon realize he's got the perfect formula for success right under his nose, he may go broke trying to find another way.

At least he's not trying to solve the economy.

Posted by Wingman at 4:01 PM No comments:

Tyler Hansbrough, a champion? Was there ever any doubt? 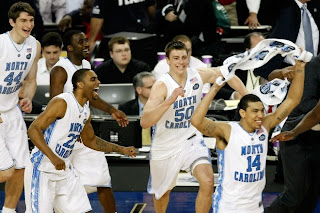 141 games, 4360 minutes, 4 years of practice, and a lifetime of dedication left Tyler Hansbrough with a closet full of accolades. He was first team All-ACC 4 times, first team All-American 3 times, and the 2008 Player of the Year. The #1 scorer in ACC history? Yeah, he was that too. But there was one thing he wasn't.

A champion. Or so to speak.

It's hard to imagine he wasn't, because he played like one every night, in every sense of the word. Hansbrough was a man almost every non-Tar Heel fan loved to hate. He put everything he had into every play under any circumstance. And for some reason, he was hated for that. But to Carolina fans, he was beloved by all.

As a sports fan, there's nothing more I could ask for than to see my team win it all. But this year, come tournament time, I found myself thinking, this isn't about Carolina winning, it's about Tyler Hansbrough winning. He deserves this.

Hansbrough stayed every time. His determination to win a championship for himself and his school always withstood the temptation of NBA contracts and cars. Could he have left his teammates behind, knowing full well he didn't get them what they deserved? Sure, Greg Oden did it. But Hansbrough? Are you kidding me? You obviously don't know this kid.

1 game, 34 min, everything he had left, no less desire than he played with the first time he put on a Carolina jersey.

Tyler Hansbrough is a champion.

A champion in our hearts with a trophy and a strand of nylon to prove it.

Hansbrough may still be ridiculed. Sure, enjoy it while you can, you'll never be good in the NBA. You're too small, you can't shoot. But when did criticism ever stop Hansbrough? Never. It only fueled his desire to prove everyone wrong.

Hansbrough could have shot 0-22 from the field in the national championship, but I doubt one North Carolina fan would question his heart. Sure the Duke fans would get a laugh. But tell me they wouldn't take Hansbrough in a second.

Hansbrough put his blood, sweat, and tears (literally) into all 142 games of his memorable career at North Carolina.

Rather than thank him for bringing a championship home to North Carolina fans like myself, I think a congratulations is in order instead. We all knew you were a champion Tyler. We're just glad you got the hardware to prove it to yourself.

Something tells me he's got more to prove.

Posted by Wingman at 9:37 PM No comments: 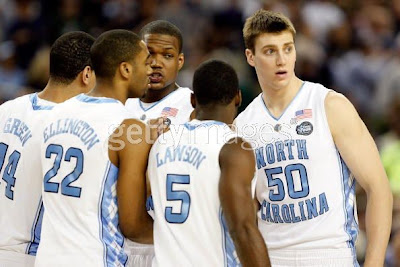 This team was meant to win a national championship. Hansbrough deserves to be rewarded for all the hard work he's put in the last four years. He battled through hatred and criticism and now stands just one win away from the goal he set out to accomplish four years ago. Lawson seems healthy at the helm and Carolina's deep repertoire of shooters look ready to cut the nets with both their jumpers and a nice pair of scissors after the game. Go Tar Heels! I'm taking Carolina on the road.

Posted by Wingman at 3:31 PM No comments: 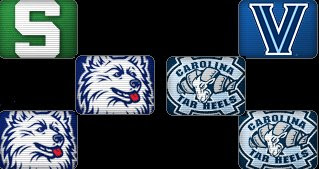 Posted by Wingman at 9:04 AM No comments: