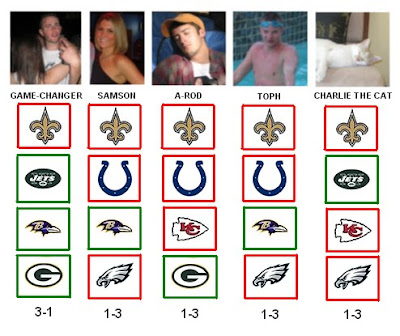 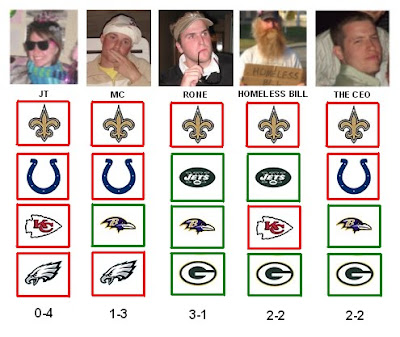 Welcome to the first annual "Talbot Talks Sports Playoff Pickoff," brought to you by the good folks at TopSpot-Promotions, because there's still a 4% chance they're contributing advertising dollars to this website. As much as I'm sure you've enjoyed tuning in for my weekly picks this year, I thought it'd be more fun to give some of my valued readers (there's a reason you weren't included in this Gervino) a shot at an NFL picks title.
What we're playing for:
1st Place: More pride than you can imagine

Pride Rock can't even support the amount of pride we're playing for.
2nd Place: A ball of yarn (at Charlie's request) 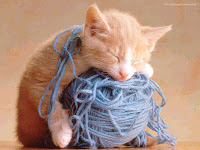 (Kitten not included)
3rd Place: A double-stack at Wendy's

(Great value purchase according to Bach Talk)
Once this blog starts raking in the millions we can play for more, but for now, we play for pride, and we play for keeps.
Let's meet the contestants:
Game-Changer (founder of the hottest new blog around: You Play To Win The Game!)
What he brings to the competition: Sexiness, 23 years (as of Tuesday) of football knowledge, bias towards the Patriots and against the Jets, and game-changeability.
Fun Fact: The man supposedly does the best Leslie Chow (The Hangover) impersonation this side of the Mason-Dixon line.
Odds of victory: 8-1
Samson
What she brings to the competition: Sexiness, one year of experience watching First Take, four years of experience watching her awesome boyfriend's favorite football team (the Giants), and seven weeks picking experience.
Fun Fact: Over the last seven weeks, she out-picked me 4 weeks to 3. I've finally come to terms with it, and I can finally admit that publicly. (Don't laugh, you all know you've lost to girls during March Madness, because the teams with sweet color jerseys and cities with large malls beat the teams you picked)
Odds of victory: 15-1
A-Rod (founder of the highly-acclaimed: Shepley Chronicles)
What he brings to the competition: Five years experience debating me about football, corny jokes, and a can't-lose attitude we can all respect.
Fun Fact: A-Rod is a "CPM" - A "Certified Picking Machine." Or so he claims. Kid's been asking to challenge me for weeks. Here's your chance A-Rod.
Odds of victory: 9-1
Toph (founder of the most popular sports website around (with the possible exception of espn.com): Bach Talk
What he brings to the competition: Confidence, an excessive love of all things Bears, sarcasm (that people that now wear #50 on TCNJ don't understand), and love of the game (if it doesn't involve working in the uniform room at the game).
Fun Fact: I asked Toph to describe himself. Here's what he had to say: "How would I describe myself? Three words. Alpha male. Jackhammer. Merciless. Insatiable. Just kidding. I took that from Dwight Shrute....But in all seriousness. I'm all of those things." I can attest to that.
Odds of victory: 12-1 (could be better, but I know he's ultimately going to pick the Bears)
Charlie the Cat
What he brings to the competition: Cat-like instincts like you've never seen before, hairballs, the opportunity to shame us all.
Fun Fact: Charlie makes his picks each week, by choosing between two treats (one predetermined to represent one team in a match-up, the other representing the opponent). If Paul the Octopus can pick every game in the World Cup correctly, this cat can pick every game in the NFL playoffs correctly. Besides, if Charlie does go perfect throughout, there's a good chance I can get some recognition for this blog and eventually go global by 2013 (even though I already almost have more readers in Israel than I do in America, according to my stats page).
Side note: Even a cat knows better than to pick the Seahawks.
Odd of victory: 20-1
JT
What she brings to the competition: JT has the uncanny ability to defeat me in Jeopardy almost every night, even though I'm three years her senior. She doesn't follow the NFL that much, but I still expect to lose to her. That's just the way it goes. Primary reason you should never let your sister in a playoff pickoff contest on your website, when you're trying to gain credibility.
Fun Fact: Her favorite food is bread.
Odds of victory: 16-1 (odds of victory against me: 1-1)
MC
What he brings to the competition: Creativity, more experience in age than anyone besides Homeless Bill, determination, and dance-moves like we've never seen before.
Fun Fact: MC is banned from my former college for life, but occasionally reappears on campus under the pseudo name, Deputy Detective Lester Peabody, from time to time.
Odds of victory: 10-1
Rone
What he brings to the competition: Composure, wittiness, experience, bias towards the Jets, perfect rotation on his jump-shot, and a gambler's mentality.
Fun Fact: I plan to average 12 assists per game in our YMCA Basketball League this year with the help of Rone's jumper. If you see "Michael Jordan's Secret Stuff" on the schedule, you might as well not even show up to the game.
Odds of victory: 8-1
Homeless Bill
What he brings to the competition: A full head of hair, a cardboard sign, and a hunger for third place.
Fun Fact: Homeless Bill is actually a fictitious person. Kind of. He's real (via Google search: homeless man), but he's not actually feeding me picks each week. But if the Cavs can hire a homeless guy in their organization why can't I? What's a good pickoff without a fictitious homeless guy anyway? So we'll use a coin flip to decide his picks (Tails: Home - cause it never fails, Heads: Away - cause it's not tails).
Odds of victory: 34-1
The CEO (Me)
I chose to be known as "The CEO," because I'm the CEO of Talbot Talks Sports. I'm also the CFO, the COO, the controller, the management team, the VP of marketing, the head of compensation, and the head of HR. Oh, and I'm in this thing, to win this thing.
What I bring to the competition: The competition itself. I planned/created it.
Fun Fact: My favorite fruit is a tie between watermelon and a strawberry.
Odds of victory: 30-1 (cause, well, we all saw how well I did in the playoffs last season (2-9)).
Good luck to all. Let's hope the new playoff overtime system doesn't screw us all over.
Images taken from Google Images
Posted by Wingman at 7:32 AM

1) To add to the legitimacy of this league, I feel that both Charlie's picks and Homeless Bill's flips should be nationally televised. Perhaps in the place of the worst football highlight show of all time, "Football Night in America." It's cool NBC, we don't need highlights, just an hour of Tony Dungy and Rodney Harrison arguing incoherently.

2) I don't know this "Game Changer" but I'd like to challenge the fact that he has 23 years of football knowledge. You can't even remember things until you're like 3. So basically, he's either a liar or an alien. And I hate both.

3) Mike, if you're reading this, thank you. Because it will be the first time in over a year you've actually read mine or Bob's blogs.

5) What would it take to get the second prize kitten included? The adorableness of that picture could stop Darfur.

1) I'm already in negotiations with NBC. A verdict should be reached sometime this week.

2) They say "Game-Changer" was born watching playoff football. Literally came out of the womb for kickoff of the first Wild Card Weekend game. Rumor has it, after the game was over, his first words were "Put Fox on. The other game is about to start." Uncanny stuff. So his 23 yrs experience is legit.

5) Can't argue with the Darfur comment. I'll scour pet shelters throughout the country and see if I can make that happen for you.

Sports marketers have traditionally used premiums to increase sales for lower-demand games such as weekday games and games against lower drawing teams. Premiums are an integral part of sports promotions in all professional sports.

Just to respond to Bach Talk: why do you doubt my 23 years of football knowledge? I am 35 years old and fell in love with the game at the ripe young age of 12 and have full memory of my life and football from that point on. Tuesday was simply the 23rd anniversary of the first game i watched.