All Signs Point to Florida... 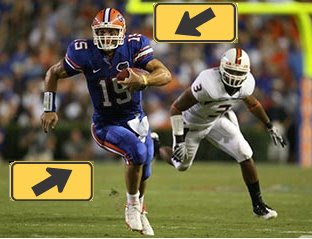 If the bowl games leading up to the BCS National Championship are any indication of the outcome of Thursday's much anticipated game, Florida should be smiling right now. All season long, the Big 12 was the talk of the town. Their quarterbacks were the best and their offenses, unparalleled. On quite the contrary, the Big Ten was much the opposite. In light of their previous six losses in BCS bowl games, the Big Ten has hardly earned respect over the last few years. So with a Fiesta Bowl featuring Texas and Ohio State, it was sure to be a Big 12 route, right? Wrong.

A Texas offense averaging 44 points per game was held to a miniscule 3 points in the first half versus Ohio State. 3 points! Meanwhile, the nation's #2 rush defense, Texas, surrendered 203 rushing yards to Ohio State. Timeout. Texas was ranked #2 in the nation in rush defense, and they gave up 203 yards rushing to Ohio State? That makes sense. No wait, it doesn't. Perhaps Texas' defense was overrated, considering no one in the Big 12 runs the ball? Oklahoma, Missouri, Texas Tech, Kansas...yeah, that makes more sense. Texas was exploited by Ohio State, and up until Colt McCoy's last pass, outplayed by Ohio State. The Longhorns' high-powered offense was held in check and their defense was beat physically. A poor defensive play call at the end by Ohio State, may have saved the Longhorns from embarassment. Although anyone watching knows that Texas made the Big 12 look weak.

In the Rose Bowl, USC dominated Penn State. The Nittany Lions were the best team out of the Big Ten this year. Yet the game wasn't even a contest. It wasn't supposed to be. After seeing the Rose Bowl and the Fiesta Bowl, I question why USC isn't playing Thursday night. If you compare the two matchups (Rose & Fiesta), USC is clearly the best of the four teams. And if Texas beat Oklahoma, I think it's safe to say USC could too. It's unfortunate USC's lighter schedule costs them the chance to play for what they might truly deserve: a national title.

What else have Big 12 teams done in their bowl games? Well, Texas Tech, tied a top the Big 12 with Texas and Oklahoma at the end of the season, went into their bowl game (AT&T Cotton Bowl) expecting to come away with a victory against the SEC's Ole Miss. However, Ole Miss would have nothing of it. The 9-4 (5-3) Running Rebels shocked the Red Raiders, as they coasted to a 47-34 victory. That wasn't supposed to happen. How about #13 Oklahoma State? They were routed by an Oregon team, 42-31, that lost 3 games in the supposedly weaker Pac-10 conference. Do you see a trend here?

If it wasn't for wins by Kansas, Nebraska, & Missouri, over teams with no better ranking than #23, the Big 12 would have nothing to show for itself this bowl season. So what does this tell us? Well, perhaps the Pac-10 isn't as overrated as we thought. When we think overrated, maybe we should be thinking about the Big 12 instead. At least this year it seems to be.

With all the talk before Thursday's game about the possibility of the Big 12 being overrated now, Oklahoma has a place to find its motivation for the big game. However, even so, I expect Florida to leave know doubt that the SEC is the better conference. Oklahoma now has something to prove. However at the same time, Florida's been there before and they have motivation of their own. Especially Tim Tebow. The runner-up for the Heisman Trophy should play with some fire, in response to Oklahoma cornerback Dominique Franks' remarks that Tebow would be the 4th best quarterback in their conference. I think Franks might regret that statement come Thursday night, when Tebow shows Franks that he thinks Oklahoma might be the 4th best team in his conference (SEC), or at least, the second for sure.

My Prediction:
Florida 41 - Oklahoma 31
They play defense in the SEC Oklahoma.

And can we get some love for Utah? #2 maybe?