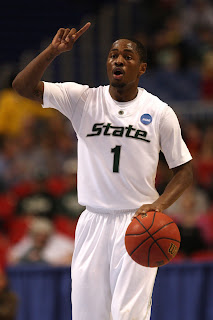 Midwest Region:
The Midwest region featured the most first round upsets, and probably left the most people upset with their bracket as well. Even #1 Louisville had some trouble against #16 Morehead State. In addition to Louisville, Kansas and Michigan State were the only other higher seeds to advance. Siena needed two overtimes to oust Ohio State. USC routed Boston College. Dayton squeezed by West Virginia. The two big upsets came from Arizona and Cleveland State. Arizona, criticized for even making the tournament, proved their worth by dominating 5-seeded Utah. Cleveland State then embarassed formerly #1-ranked Wake Forest 84-69. The game was never even close.

How it changed the outcome:
With Wake Forest out of the way, Louisville's road only gets easier. The same can be said for Kansas. Watch out for USC though. It won't be easy for Michigan State to get past the Trojans.

West Region:
Connecticut would have been given a tougher test if they played my 6th grade rec team. The Huskies won by more than their opponent scored. The only upsets were the 9 over the 8 and the 10 over the 7; nothing special. Marquette barely survived, beating Utah State by 1. That was the extent of excitement in this region.

How it changed the outcome:
Nothing's really changed. Connecticut looks real good. Memphis didn't look great, but judging by their second round performance today, round 1 was just a fluke. Expect Connecticut and Memphis to battle for the Final Four spot.

East Region:
This region was chalk, aside from a Florida State loss to Wisconsin in overtime. Pittsburgh caught a scare from East Tennessee State. Eric Maynor and VCU just came short of another upset, losing to UCLA. That was pretty much the excitement.

How it changed the outcome:
Florida State could have been a sleeper, but that's obviously not the case anymore. Don't be fooled by Pitt's troubles against East Tennessee State. They're too good to be worried about after one lousy performance. Expect them to bounce back versus Oklahoma State. Team to watch: Villanova.

South Region:
North Carolina won by 43...without Lawson. That's pretty scary. Syracuse picked up where they left off in the Big East tournament; playing well. Clemson ended yet another disappointing season (sorry Brint). The cinderella of the south is Western Kentucky.

How it changed the outcome:
Nothing has changed here either. The fate of North Carolina rests in Ty Lawson's toe. My question is: How long can Syracuse last until they run out of gas?